waiting for the guests to arrive

And with every half term or summer holiday that has passed we’ve had various people come over, one family at a time. But now that the house was getting more habitable, we were starting to get repeat bookings. And by Easter 2012 (for newcomers *waves this is roughly where the blog is right now) we had a lot of interested parties.

It is no exaggeration to say that I have a lot of friends. On a sliding scale from inner circle, see them all the time, known them forever friends to barely know them but we bump into each other now and again and have fun together. I love making new friends, if real life was like Facebook, I’d be ‘adding as friend’ every day. Thanks to my job I am constantly meeting interesting, fun people and maybe it’s the ‘only child’ in me, but I am like a magpie, always on the lookout for new, shiny friends. But what I sincerely hope is that I always make time for the oldies and originals. The ones whose children are my godchildren, the ones who were bridesmaids at my wedding and the ones who I could turn to in a crisis. As a result of decades of magpie like friend collecting, my friends are not necessarily friends with each other. They’ve met, over the years at weddings, birthdays and bbqs but I don’t have one big gang of friends who all know each other.

But this Easter, they were all coming to La Maison Blanche and who knew how that would go?

The first to arrive were the Candys.

I met Lorraine about 15 years ago when she interviewed me for a job. We ended up dancing in a basement bar somewhere in Soho having only stopped off to get some cash out of a cashpoint. I got the job. And some days we wonder if it actually WAS a basement bar or wether we inadvertently stumbled into someone’s living room and just danced there as we’ve never found our bar again….

Lorraine has four children and a diabetic dog. And our fifteen year friendship has now been enhanced by our husbands becoming great friends (they go to the theatre together – we suspect its just so they can sit in the dark and rest) and now our children are friends and ichat each other with smiley faces and words that aren’t words but merely a string of letters to express emotion LOLZ. Sky the eldest of the Candy children is quite formidable, tall and sometimes bossy she is one of the few people that can keep Sebastian in check – she even terrifies me sometimes. But I love our chats about life and the universe and as I have no girls of my own I always enjoy my times with Sky especially now as she is getting older. I can hardly believe that all those years ago on a New Year’s Eve night out, when Lorraine told us she was pregnant we (rather selfishly) declared that it was a disaster and would “ruin everything!” In fact Sky’s arrival has been the start of an amazing adventure for us all. One that still runs. Gracie in the middle is beautiful inside and out and both my boys are in love with her. Seb has a pic of her as his screen saver on his ipod and gets very embarrassed when we draw attention to this. She is potentially their Helen of Troy in later years. Henry is an enigma to my boys, having grown up in a household of women (apart from James and Duke the dog) and intitally he and Seb despite being the same age were the toddler equivalent of playdate between Ross Kemp and Jarvis Cocker. But bizarrely, over the years, the two youngest boys have formed a strong bond over their love of moshi monsters and the Wii. And finally there is Mabel. Loved by everyone. Especially her, often truculent, god father Peter.

So we were all very excited about their arrival. And its a quick and easy plane ride from City Airport to Pau we had told them. You’ll be here for lunch on Good Friday. I’d made a quiche. 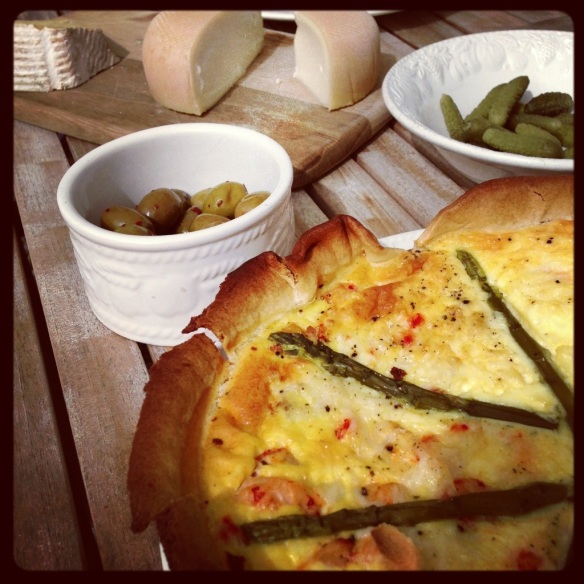 They texted excitedly to say they were about to take off. But then about twenty minutes later we got another text ‘Forced to land at Stanstead – being held here’ The plane had a problem and they’d been made to land at a nearby airport only minutes after their start. And then they were held in an aircraft hanger like the hostages in Die Hard in Nakatomi Plaza for hours with no food or water. And then they were put on a bus back to City Airport. And at this point we sat dismally in our kitchen convinced that the Candys would just give up and go home to North London.

On holiday in Cornwall with the Candys

But thanks, I suspect, largely to Mr Candys fortitude they persevered and got back on a plane about five hours later and got to Gensac finally around 6pm having been on the road since 5am that morning. And we could not have been happier as our favourite holiday companions were IN. THE. HOUSE. Literally.

And for forty eight hours it was just Whites and Candys, building dens, fires in the woods and eating our body weight in cheese. But soon the Levetons would arrive with their two children and the friend combining would begin. But thats for another blog post.