Another summer had rolled around. Now for many the concept of my husband and children living in a different country to me is hard to understand. And I admit it is a little odd. But in many respects it makes great sense. For up to four weeks a year, I get to go out, see friends, party,have lie-ins, go shopping without someone insisting we go via the Lego shop first. In short, I get to be single and childless again. And don’t let anyone tell you different – it’s GREAT!

Spontaneity is something there is little of when you have children. Just getting out of the house can take anything up to twenty minutes by the time you’ve located a missing shoe, or got half way down the road when someone decides actually they DO want to take their scooter. And as an only child, truth be told, I find this really hard. And the thing no one talks about when they have children is how unrelenting it is. We have no relatives nearby to help so we’re it. All the time. For Peter this seems less of a burden. Largely as life in general is less of a burden to Pete. He is one of those infuriating people who uses expressions like ‘hey don’t worry about it, it will all be wonderful’ or ‘vic, it’s ALL good’ (he’s actually stolen this from Gwyneth Paltrow as response to my ‘what would Gwyneth do? Life mantra) But for me, it’s actually quite tough.

On a more practical note, Peter is self employed so can take off to France for six weeks in the summer while I am a wage slave with only five weeks holiday a year. So all in all, it makes sense for him and the boys to go feral in France while I live it up in London. And this summer held prospects of a lot of fun. My friend Dawn was getting married so I had a hen weekend and a wedding weekend to fill my single time. The hen was vintage themed on an open top double decker bus and took us all over London for a day. And there were barman on the bus, and we stopped for lunch and we got shamrocks painted in our hair at Bleach in Dalston. And it was crazy amounts of fun. And I didn’t have to get home and explain to a ten year old and six year old why I was wearing a funny dress, have a shamrock on my head and reek of mojitos. 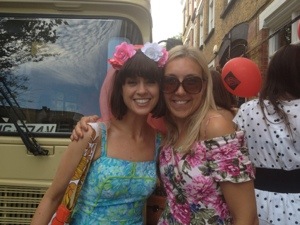 And it was Olympic year – so I tried and tried to get tickets to go and see something but in vain. Until, I managed to get one ticket to the women’s soccer final. And so I went up to Wembley, on my own to watch football. And it was a strange sensation watching other people in couples or big groups marching up Wembley Way. And as I struggled to take a ‘selfie’ just to prove I’d been there at all, a nice lady took pity on me and offered to take a pic of me. And suddenly being on my own was a little more sobering. And, watching women’s soccer on your own, Olympic or otherwise is rather a dull experience. And when the Mexican wave comes around you feel like a total idiot jumping out of your seat by yourself.

So towards the end of my four weeks of partying, not only was I exhausted and possibly malnourished from a diet of wine and pistachio nuts, I began to yearn for noise, mess and unreasonable demands. So, reader, i remembered why I had children in the first place – it’s really what life IS all about. So perhaps the real joy of being apart is that it makes you want to be together. And anyway, partying at weddings til 3am is a young woman’s game. It WAS fun tho!

4 thoughts on “Summer being single”