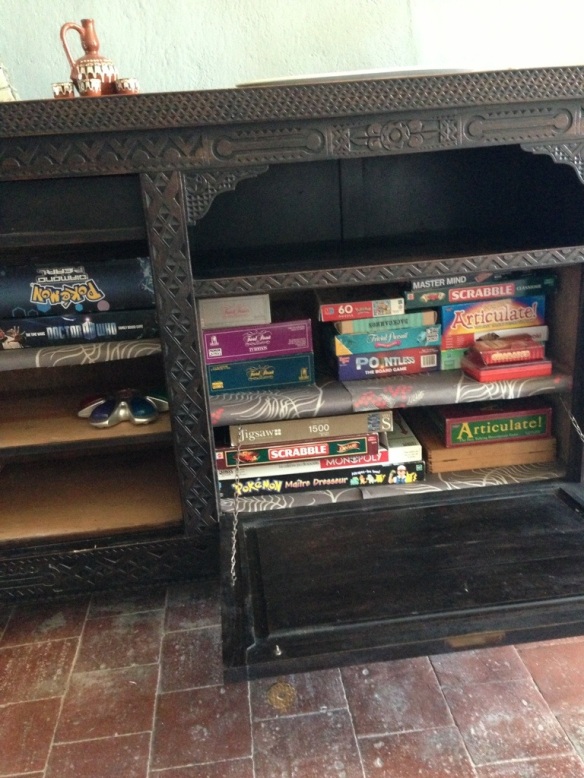 When we bought La Maison Blanche – we naively thought that bringing our children to rural france for every holiday would mean shared rustic experiences. There were to be no televisions in the house, so for at least ten weeks a year they’d be unable to watch that god awful rubbish on the Disney Channel involving the same rotating five actresses all bleating on about “dating and like, friends and like, totally relating…”

Instead, we thought, smugly, we would all sit around and talk. They’d ask questions about our lives before them – show interest in the history of us, the house or themselves. Oh no. We might occasionally get ‘WHAT?!!!*** THERE WAS LIKE NO MOBILE PHONES WHEN YOU WAS YOUNG….THAT SUCKS’. HOW DID YOU, LIKE, INSTAGRAM?’ But of course these days you don’t need a TV to watch, er, TV (yep thanks netflix and youtube). So electronic items have seeped into our french life. And access to moving pictures is unrestrictable as Peter needs his computer there to do his work and I need my ipads to play Candy Crush Saga. So it began with the children then using them to watch films. And then came the Olympics so we worked out a way to live stream via BBC.com to watch the Opening Cermony and so before you know it you’re right back to where you began with constant, 24 hour, TV access.

Anyone know what the thing behind me does though? Plays big black plastic disc things…

But if the battle against electronic items is a losing one – the war is being won slightly thanks to our enormous and ever increasing board game selection shown above. In London we may occasionally get the Monopoly out for a long, slow, torturous game which always ends with Seb banging his fist on the board and sending houses flying when he is losing, but that’s it. Apart from games of cards or endless pokemon card exchanging that I still don’t understand. However, in France just the lack of a TV seems to encourage game playing. And trips to Vide Greniers always result in some classic being bought in another version french or multilingual (I once found the French equivalent of a Countdown game)

My best ever buy is Mastermind – a 70s classic based around the TV show but nothing to do with the TV show. You have to work out the sequence of coloured pegs your opponent has selected. If you’ve got right colour, right place – you get a black peg. Right colour, wrong place – a white peg. Sounds wild right? Well it is.

And who could fail to be excited by french versions of English classics. French Trivial Pursuit played late, drunkenly at night can keep adults entertained for hours “c’est Vanessa Paradis?” Pretentious nous? And even Monopoly when played with french properties somehow seems just that bit more exciting. Occasionally we even get to the end of a game without anyone storming off in a huff of bankruptcy. Or reaching for the remote control to find out what’s happening to Austin and Ally.