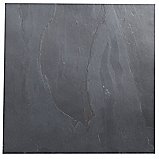 I haven’t shown you around our top floor yet. Largely because it is derelict. Or it was. We had been so busy doing up the bits of the house we needed to use that we left the third and top, attic floor well alone. Our cleaner, Madame Landauer refuses to go up there on the grounds that it makes her Peur (scared) – she is convinced there are bats living there or worse (can’t think what would be worse than bats really – lions? Crocodiles?)
But we had by now bought an enormous chandelier to light our way up there. It is made up of hundreds of wine glasses which seemed rather appropriate for our French home. Though ironically, it came from a danish website whose name I just can’t remember. But if you google ‘wine glass chandelier‘ they come up I think. It is a grand hallway to a shabby set of rooms.

And in between them was a horrid little room with the ceiling falling down and damp rot everywhere….

We desperately needed another loo – so that while one person showered the other, up to, 13 people didn’t have to cross their legs! And this bathroom could be used by all sleeping on the second floor in it’s various interconnecting bedrooms.

So we decided to make our rotting, top floor hovel, middle room a bathroom. with a curved, walk in shower, a loo and the original sink, salvaged. We plastered, we painted and we caulked. Peter replaced the ceiling and the floor and then we tiled and we painted some more. And we drove our floor tiles all the way from here as I’d found them on the Topps Tiles website and had nowhere in London that they would work but in France? Somehow ok. They are the Henley range and I love them.

So here is our top floor bathroom now! Jolie non?