If Peter looks a bit mad starey eyed here – it’s because he was. He began project hallway very early on in our Gensac House renovations – wide eyed and optimistic (you can tell this was a while ago from the lack of grey in his hair!) but then the magnitude and the amount of other projects meant it was left alone.

The stairs would get a polish and clean and Peter insisted we bought some curtains to cover the huge front door to keep drafts out, but this gave the whole place a rather spooky Twin Peaks feel which I hated. “I’d rather freeze,” was how I normally reacted. 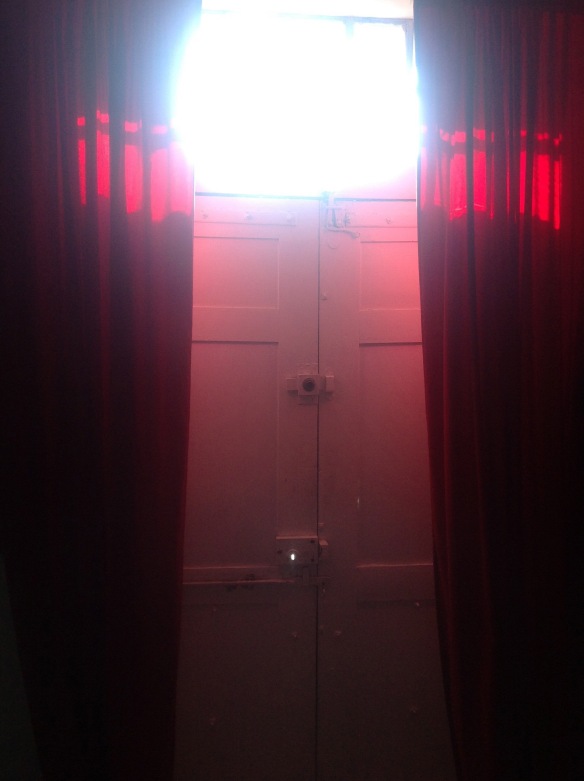 And so, as much of the rest of the house was now finished, I nagged and nagged that I’d like the hallway decorated now please. And my look of choice involved wallpaper which is Peter’s least favourite diy job.

I looked at dozens of lovely statement wallpapers but they were all roughly £75 a roll or more and we needed at least four rolls. And then one day, I was wandering through John Lewis and saw a sale on end of the line wallpapers and a pale grey one with odd stripes was in the pile – four rolls of it to be exact and it was £4.50 per roll! That’s more like it. And as so often has happened with the French House having limited funds has made choices for me – which in many ways make it easier.

We then found a chandelier in a Vide Grenier which was totally broken, but pete assured me he could fix it. And the rugs I already had as I buy them up in bulk from Matalan. I threw those red velvet curtains in the bin and peter made a cupboard to go around the electricity metres which you can’t see in pic but is life changing.

And – Tada! An entrance hall worthy of a grand entrance.

5 thoughts on “Making an entrance”