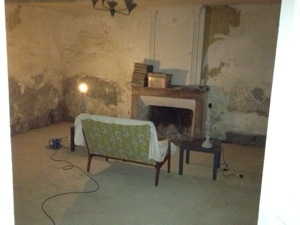 When we first bought the ‘house in france’ one of it’s biggest selling points was the sheer size and scale of the rooms. Majestic one could say. Certainly compared to London living where if you can afford a three story shoebox with a postage stamp sized garden its considered living in Versailles! And the french house had rooms the size of entire floors of our London home. And so it was with the ‘Salon’. Too grand to be called a ‘sitting room’ and the word ‘lounge’ brings me out in funny lumps n bumps and certainly not a ‘drawing room’ as we had no intention of withdrawing to it – in fact we intended to spend hours of our time there so we plumped for the french – ‘salon’ when referring to it.

Initially the salon didn’t have a floor. It had rats running through it eating up the broken floorboards and so we closed the doors and avoided it at all costs. But once we’d had some people come in and concrete the floors (sorry Ratty – maybe they’re still there like Han Solo – frozen in time or people in Pompeii having their tea when the volcano hit) we started to use the biggest room in the house.

And for Christmas each year we built big fires and had the tree and a couple of sofas thrown in to sit on. The mid century modern sofa eventually ended up in the kids sitting room (see blog post here) but the big squishy grey sofa will remain. It came from IKEA and is a bargainous EKTORP – the cheapest one they do. But as it’s already had children peeing on it and paint splattered over it as part of project redecorate I think it was a wise move not to go for Parker Knoll!

It is essentially the last room we need to decorate and in some ways I’m worried about where my blog will go once I’ve shown you this!!! Although we still have sub rooms and hallways and barns and exteriors to make over. So don’t abandon me just yet.

Once Peter had plastered the most damaged bits of wall (and the Kings Speech style peeling paper had finally been removed) we started painting. I’d had an idea that I wanted this room to be pink. I cant even remember why I got this in my head but I must have seen a pink sitting room in some back issue of Living Etc or some such. And Peter insisted I get an Earthbourne paint as they are clay based and better for our damp walls. So THIS is what I plumped for being the only pink they had at the time. And then we started painting. And we made the kids help…

Pink to make the girls wink

And it was VERY pink. And we used two whole tins of relatively expensive paint.

our brush with pink

And then it was almost finished and……. I HATED it. It looked like a 10 year old girl’s bedroom. All it needed was some White Company bunting and a One Direction poster and that’s where we’d be. And I knew that I could not leave it like that no matter how much our expensive, clay based paint had cost. So we went back to the drawing board. And the quest for the perfect pink began again…… like Indiana Jones hunting for the Holy Grail – I was looking for my dream paint colour. The quest was on…

15 thoughts on “The Grand Salon (or, how we finally painted our sitting room!)”

A journey through life in southwest France